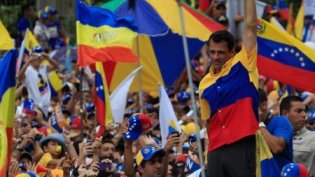 Yesterday, on the eve of a national election, interim Venezuelan president Nicolas Maduro spent time visiting the tomb of Hugo Chavez to mark the anniversary of the 2002 coup d’etat attempt.  Of course Maduro wasn’t campaigning because that would have been illegal as the day before an election is a black-out day and candidates can’t call upon electors for support. He was merely visiting his old buddy Chavez, and perhaps hoping for a bird to chirp some last-minute suggestions, of course he was …

…other Latin American countries have made social gains without separating families and friends, and without ending up with half-empty supermarket shelves

In today’s election, it is assumed, although nothing is certain until the votes are counted, that  Maduro, Chavez’ hand-picked successor, will win and become president and carry on the policies of the last years. The opposition has been gaining in the last days and the gap is 7% according to Datanalisis, but only one poll counts. Unfortunately for opposition leader Henrique Capriles, and others, Maduro’s invocation of Chavez in the form of birds, and his constant deification of the late president seem to be more influential on voters than meat and potatoes election issues.

In his Miami Herald column today, Andres Oppenheimer laments the slow pace of social gains in Venezuela when compared to other Latin American countries.

It is sad indeed to see a country with such great potential being mishandled by its leaders. The propaganda about the advances  made are all to easily debunked; from illiteracy levels to infant mortality, from poverty rates to education, the figures don’t hold up. As Oppenheimer puts it:

The bottom line is that the Venezuelan government and its propagandists — like Lula da Silva — are right when they cite some of Venezuela’s social gains, but what they are not telling you is that several other Latin American countries have done much better in their fight against poverty. And they have done so without sacrificing their democratic institutions, without dividing families and friends, and without ending up with half-empty supermarket shelves.

Let’s hope for a safe and transparent election today.