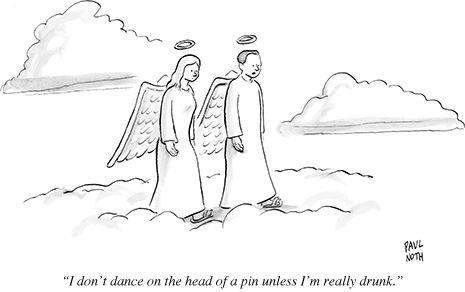 The concept of debating or discussing how many angels can dance on the head of a pin has a very long history. It goes way back, but no matter how far into its past you delve it still means the same thing. It refers to people wasting time pondering a topic of no real value while other more germane issues go unchecked.

The actual words are, frankly, irrelevant. Had Trump referred to these two places as filthy cesspools it would be no less egregious.

Yesterday many in the media provided a prime example of the counting angels canard. They devoted hours to the investigation and analysis of whether President Trump asked why the USA has to have immigrants from shithole or shithouse countries. Various talking heads appeared along with in-studio guests to get to the bottom of this most pressing issue.

The fact that the president swears is not the problem. I am sure he is neither the first nor the last to do so. That his statements were racist is of much more concern.

The crux of the matter is that the president spoke in a derogatory manner about Haiti and the entire continent of Africa. The actual words are, frankly, irrelevant. Had Trump referred to these two places as filthy cesspools it would be no less egregious. I can’t help but think that the major networks are devoting so much time to this because of the shock value of the word: call it the shit factor.

Shit house or shit hole, Trump’s presidency so far has been a real shit show.

As was the case when Turks invaded Constantinople while scholars were distracted debating the angel puzzle, with the media enjoying a feeding frenzy over Trump’s strong language, they are not pressing him on the real issues. Shit house or shit hole, Trump’s presidency so far has been a real shit show. I implore the media to step back and look at the big picture and not be thrown off kilter by sensationalism and minutiae.  Don’t open a loophole for the Trump administration to jump through.

DCMontreal – Deegan Charles Stubbs – is a Montreal writer born and raised who likes to establish balance and juxtapositions; a bit of this and a bit of that, a dash of Yin and a soupçon of Yang, some Peaks and an occasional Frean and maybe a bit of a sting in the tail! Please follow DCMontreal on Twitter and on Facebook, and add him on Google+
Standard
Loading Comments...