On the left bikes only, no pedestrians or joggers. On the right, walkers only no bikes.

Or perhaps it’s because it is my birthday today, but for some reason, I have to mention something that puts me in a pro-bicycle position.

Maybe it’s the unusually mild weather we have been experiencing this autumn, but there seem to be more early morning joggers in Montreal than I can recall. I see them in the park where I myself trudge through a morning run, and I see them on sidewalks and roads. But one place where I wish I did not see them is on designated bicycle lanes.

In a nutshell: it is not acceptable to walk, run, or jog on a bicycle path.

It’s only proper that I point out this fact that, given I have often harangued cyclists for riding on sidewalks.

…or maybe you’re just out to sweat off last night’s Jameson shots, a bike path is not the place to do it.

During the course of my daily run, I cross a bicycle path, I do so very gingerly, looking in both directions to ensure both my welfare and that of any cyclists. While it seems people have grasped the concept that walking on a bike path is both stupid and dangerous, many people still think it is alright to jog or run on them. Regardless of whether you are training to give the Kenyans and Ethiopians a run for their money in the next marathon, or are more likely to be at the back of the pack with the people dressed as mascots and those who will run the race with a tray full of beer glasses, or maybe you’re just out to sweat off last night’s Jameson shots, a bike path is not the place to do it.

When dedicated bicycle lanes and paths were first being introduced to our fair city it was only natural that people took some getting used to them. Much like the trees in the garden of Eden, there are many paths in the park that are fine to walk on, and only one that is forbidden. Yet at first many folks just strolled along the bike path. You don’t see that too often, but joggers and runners still have a bit more of the learning curve to scale before they grasp the danger they pose to themselves and cyclists.

DCMontreal – Deegan Charles Stubbs – is a Montreal writer born and raised who likes to establish balance and juxtapositions; a bit of this and a bit of that, a dash of Yin and a soupçon of Yang, some Peaks and an occasional Frean and maybe a bit of a sting in the tail! Please follow DCMontreal on Twitter and on Facebook, and add him on Google+
Standard

The Weekly Writing Challenge this week focused on “Fit to Write”. My piece is about my attempt to stay fit by running, as well as a millennial coincidence.

Sometime during the late winter of 1997 I decided it was time I started doing some physical exercise. I had for many years been a pitcher in a local fast-pitch league which gave me a pretty good work-out a couple of times a week during the summer, but I figured I needed something all year round. I’m not a big fan of gyms or joining in general, so the YMCA up the street didn’t appeal to me.

This seemed to naturally bring me to running. It has all the elements I was looking for; I could do it on my own, when and where I wanted and for as long as I liked, or could last. The only problem was  I’d tried running in the past and hated it!  But this time I was determined so I started out small, a few minutes each day – Monday through Friday. I did stick with it and was soon running 30 – 45 minutes each day before going to work (I still can only run in the morning). Five days a week with recovery on the weekends.

During December of 1999 when it seemed the world was abuzz with Y2K fears and predictions of total anarchy once all the computers fried simultaneously and plunged us into darkness I did some figuring of my own. I had kept a small journal of my running so I knew the exact day I had started, I also knew I had not missed a day. When I did a bit of math, going back to day one and counting the weeks through 1997 and up to December 31, 1999, a Friday, it became eerily evident to me that on that day I would be undertaking my one-thousandth consecutive daily run! 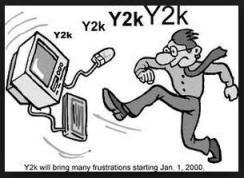 Somewhere along the way, back in February or March (I’ve mislaid that journal, and am not inclined to do the math again) the millennial gods and the running gods teamed up and pushed me out of bed at precisely the right moment to set me in motion on a journey to the new millennium (or maybe they just wanted me to run off some beer).

All those fireworks at midnight around the world; I like to think they were for me and my 1000 morning runs.

I have to admit that, being completely taken aback by the coincidence, I did the calculations again and sure enough came to the same result. All the millennial hoopla took on a different meaning for me, I started to take it personally. All those fireworks at midnight around the world; I like to think they were for me and my 1000 morning runs. I’m probably wrong on that, but a guy can dream!!