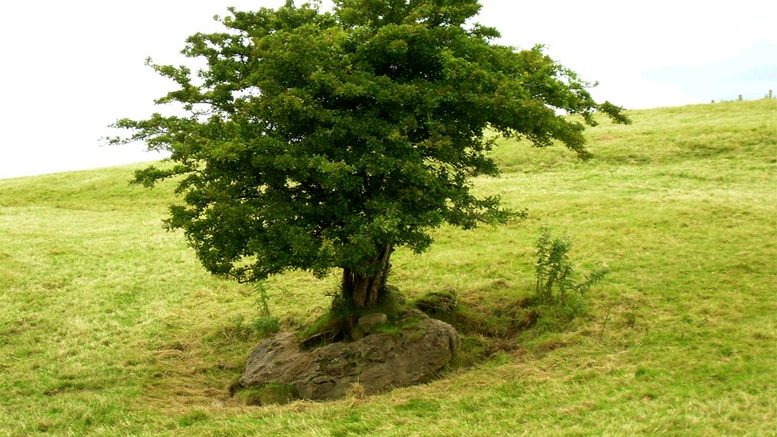 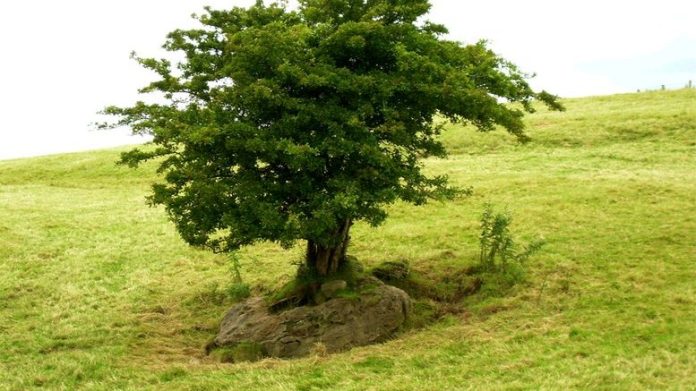 My maternal great grandparents were both born in Dublin. As was the case with many Irish at the time, not long after they married in the 1880s they emigrated to England. But of course, the bloodline remains. I’ve come to the conclusion that this makes me a Leprechroon. Yep, not an octoroon, nor a quadroon, but a Leprechroon. 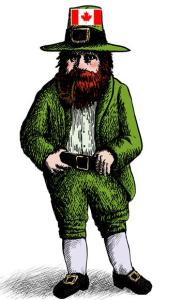 Like many of the men of his generation, my Montreal-born grandfather spent several years in France during the early part of the last century in the trenches of The Great War, however, he did manage to find time to meet and marry my London-born grandmother. Following the war they set up home in Montreal, never to return to the UK. But the Anglo-Irish influence certainly seeped into subsequent generations.

Every year on March 17, or the Sunday before, St. Patrick’s Day was celebrated at my grandparents’ place with a huge meal. The table was awash in green and festooned with shamrock, I’m sure that if my grandfather had stayed still long enough he too would have been decked out in green decorations. Yet the meal itself was not what you might expect. No ‘traditional’ Irish fare – no corned beef and cabbage or soda bread –  but good old English roast beef with all the trimmings. Aside from the ‘joint’ of beef, there were four or five vegetables, Yorkshire puddings, gravy and, Lima beans. No amount of cholesterol was deemed too much.

The table was awash in green and festooned with shamrock, I’m sure that if my grandfather had stayed still long enough he too would have been decked out in green decorations.

Nor was attendance at the parade encouraged, no doubt due to my grandfather’s claim that ‘every drunk in the city will be there’. This comment, one of his extensive lexicon, he made whenever any suggestion was made to attend any event. I don’t know if it was his time in the trenches, but he was a terribly anxious man who always managed to find a way to see the potential disaster in any situation. However, as an adult watching the annual parade over the years,  I came to realize just how accurate he had in fact been.

Being an Irish Catholic family, superstition played a role in our lives. Not Friday the 13th or broken mirror fears, but certainly the tossing of spilled salt over a shoulder, and some less well-known actions. If you went out of the house and noticed you had forgotten something when you went back to get it you had to sit down. No dashing back in, grabbing your umbrella, and zipping out again. Uh uh, you had to actually sit down, often confirming the act by shouting ‘sitting’. No time was specified, but sitting was essential, no matter how much of a rush you were in.

… never, ever, ever count the number of cars in a funeral procession!

If someone gave you a blade – a knife, scissors, garden shears – you had to give them a penny. An itchy palm indicated money was on the way, as did bubbles on the top of a cup of tea, assuming they were spooned up and consumed.

I don’t know if adhering to these had any lasting effect on us, but to this day I never, ever, ever count the number of cars in a funeral procession!

Although from time to time one does come across proof. German band-leader James Last’s passing a few years ago reminded me of yet another family superstition. One should never put an open umbrella over one’s head while indoors. It is okay to open the umbrella and keep it to your side, or place it in a tub to dry, but never put it over your head.

While indoors it is okay to open the umbrella and keep it to your side, or place it in a tub to dry, but never put it over your head

Several years ago James Last was involved with PBS fundraising. One of his concerts was aired – over and over again in fact – and viewers were asked to call and pledge money.

During one song members of the audience left their seats to march around the auditorium, many of them sporting umbrellas, some fashioned with bills to look like ducks. Oh dear I thought, this doesn’t augur well. And sure enough within a mere twenty years or so James Last was dead.

DCMontreal – Deegan Charles Stubbs – is a Montreal writer born and raised who likes to establish balance and juxtapositions; a bit of this and a bit of that, a dash of Yin and a soupçon of Yang, some Peaks, and an occasional Frean and maybe a bit of a sting in the tail! Please follow DC on Twitter @DCMontreal and on Facebook, and add him on Google+
Standard

I have nothing against vegans or their food, but if it’s so good, why not call the product “Yellow Pea Spread” instead of trying to fool consumers with the word “Mayo” on the label?

Well what do you know? A recent piece on NBCNEWS.com confirms what we mayonnaise lovers have known all along: mayo is the number one condiment in the United States. Not ketchup, not mustard and not salsa – which was disqualified on a technicality; it’s a dip not a condiment – but good old whipped up egg whites mayonnaise. While this poll was limited to the U.S., I feel confident that the result would hold up in many other places. For instance the Irish have long appreciated the wonders of mayonnaise, even going so far as to name one of their counties Mayo!

The NBC story tells of a lawsuit the good folks at Hellmann’s have launched against a vegan product called “Just Mayo”. The ersatz condiment uses – brace yourselves – yellow peas instead of eggs! Sweet thundering Jesus! I have nothing against vegans or their food, but if it’s so good, why not call the product “Yellow Pea Spread” instead of trying to fool consumers with the word “Mayo” on the label? 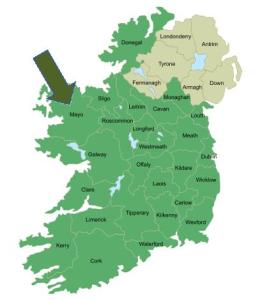 At least Kraft Foods didn’t try that with their Miracle Whip product. As a stand-alone condiment Miracle Whip is fine, but it isn’t mayonnaise. And anyone who says different should not be trusted and should always be watched closely for signs of further traitorous acts. Needless to say, any food emporium that would present a diner with Miracle Whip claiming it to be mayonnaise should be vacated immediately, and authorities notified.

I enjoy other condiments as well as mayo, in fact often in tandem: a smooth creamy layer of yellow mustard on a burger or hotdog, some hotter Keen’s mustard mixed from powder form on roast beef, ketchup on Shepard’s Pie, even a touch of relish can do much to enhance my dining pleasure. For those of you reading this in the U.S., hold on tight, because this tends to come as a shock to many of you, but mayonnaise on fries is the way to go. Give it a try and you’ll never go back to ketchup. The Belgians have known this for years, but many in North America are hesitant, even skeptical of the delicacy.

Congratulations to all my fellow mayonnaise consumers and good luck Hellmann’s! But I do wonder what you did with those two old ladies who argued about everything but your mayonnaise …

DCMontreal – Deegan Charles Stubbs – is a Montreal writer born and raised who likes to establish balance and juxtapositions; a bit of this and a bit of that, a dash of Yin and a soupçon of Yang, some Peaks and an occasional Frean and maybe a bit of a sting in the tail! Please follow DC on Twitter @DCMontreal and on Facebook, and add him on Google+
Standard

Saint Patrick was a gentleman, he came from decent people,

His father was a Callahan, his mother was a Grady,
His aunt was O’Shaughnessy and uncle he was Brady

Chorus:
Success to bold Saint Patrick’s fist,
He was a Saint so clever,
He gave the snakes an awful twist
And banished them forever

The toads went hop, the frogs went plop, slap dash into the water
And the beasts committed suicide to save themselves from slaughter

The Wicklow hills are very high and so’s the hill of Howth, sir
But there’s a hill much higher still, Ay, higher then them both, sir

And it was on the top of his hill, Saint Patrick preached the “Sarmint”
That drove the frogs into the bogs and bothered all the “varmint”

As we enter the period of solemn preparation – no not Lent, that started weeks ago – the week leading up to St. Patrick’s day, there’s a great piece in the New York Times by playwright John Patrick Shanley. The Darkness of an Irish Morning recalls the author’s trip to Ireland with his aging father to visit relatives and illustrates the dourness of their existence. They all talk at once in varying accents, few of which are understandable to the author, and fight like cats and dogs. As Shanley learns his long dead grandparents were the root of this darkness of spirit.

OVER the course of days, I asked for stories about my grandparents. You would think that when dealing with people who talked this much, getting information would be easy, but no. When the subject of my grandparents came up, a sudden circumspection would overcome the source. Tony would look vague. My father would become reticent. My cousins would claim to know nothing. Even my Aunt Mary, who talked like Proust wrote (that is, endlessly), even Mary had little to say.

When my grandmother was presented her first grandchild, my sister Kathleen, she tore the pretty bonnet the baby wore off her tiny head, declaring: “It’s too good for her!”

This brought to my mind a story about my own paternal grandmother, though Glaswegian, no less miserable – blame the Celts. (To be fair she and her two siblings were orphaned at a young age and came to Canada as part of the Home Children project in the early years of last century.) On one oft recounted occasion, upon his return from World War II, she was presented with an acquaintance of my father’s. Before the introduction could be made she brushed it off saying: