Mr. Trudeau please cancel any contracts with advertising agencies that may involve the writing of a catchy phrase to be used next year for our 150th birthday; we have our slogan.

There have been some great advertising slogans over the years. “I ❤️ New York”, said I love New York, not I heart New York, is one of the first to pop into my mind. “It’s the real thing, Coke” was another, taking a shot at competitor cola Pepsi. It was popular until it was hijacked by the cocaine-snorting drug subculture. As simple as these phases seem in retrospect, I imagine big bucks were spent on them.

Recently we Canadians were given perhaps the ideal patriotic slogan when President Barack Obama stated “The world needs more Canada”. Bingo! There’s your slogan. Mr. Trudeau please cancel any contracts with advertising agencies that may involve the writing of a catchy phrase to be used next year for our 150th birthday; we have our slogan. And who better to unveil our new slogan than the first Black president of the United States?

This past weekend our new moniker was reiterated when U2 front-man Bono uttered it at the Global Fund Conference in Montreal.

Perhaps it is a reflection of our Canadian culture that these words have not been festooned on T-shirts, ball caps and bumper stickers. In the days of Trudeau pere no time was wasted printing merchandise with his Fuddle-Duddle  comment emblazoned on it.   Or could it be that President Obama has let the cat out of the bag too soon?

DCMontreal – Deegan Charles Stubbs – is a Montreal writer born and raised who likes to establish balance and juxtapositions; a bit of this and a bit of that, a dash of Yin and a soupçon of Yang, some Peaks and an occasional Frean and maybe a bit of a sting in the tail! Please follow DCMontreal on Twitter and on Facebook, and add him on Google+
Standard

Although I’ve moved into the Ipad world, I still find myself in need of an actual pen from time to time. Whether for a crossword puzzle (yep … in ink, no erasing for me) or for a shopping list, I need the occasional ball-point. I tend to lose pens about as quickly as I can buy them, so I buy them at the dollar store. I admit this is a bit like a slot machine; maybe you’ll hit the jackpot and get a full card of functioning pens, or maybe they’ll all be dried out duds – you pay your dollar and you take your chance.

What surprised me was that President Barack Obama seems to do the same thing – I assume he has someone else go to the dollar store. To illustrate this,  watch him below signing the healthcare bill a couple of years ago. He must go through eleven pens; he keeps picking up a pen, getting one letter done and then he’s got to put it back and take a new one! You’d think that for something as important as this they’d have a pen that was fully functioning, that he could write his full name with! I know just how he feels, having gone through the same exercise many times with a bad bunch of cheap pens.

Luka Rocco Magnotta is taken by police from a Canadian military plane to a waiting van on Monday, June 18, 2012, in Mirabel, Quebec.

It is important to note that “Newsmaker” of the year shouldn’t be confused with “Man, Woman or Person” of the year. Time magazine recently named Barack Obama as Person of the Year with runner-up Malala Yousafzai.

I point out this difference because The Canadian Press (CP) has named Luka Rocco Magnotta Newsmaker of the Year for 2012. The selection is certainly understandable as he dominated the news. It started with his grisly murder and dismemberment of his victim Jun Lin followed by the mailing of Mr. Lin’s body parts to various recipients. Then his international run from the police and finally, giving in to the need to read his own media coverage he was caught in a German Internet cafe surfing the web for stories about himself. Wicked and cruel for sure; perhaps not too bright!

The choice, made by editors and news directors, is rooted in the eye-opening reach of a story that erupted last May after the death and dismemberment of university student Jun Lin.

It is a sad reflection on Canadian society that we did not produce a positive or constructive enough newsmaker in 2012 to overshadow Magnotta’s destruction. At least the runner-up, Vancouver-area teen Amanda Todd’s video and suicide prompted an international discussion on bullying.

Since the first Newsmaker of the Year poll back in 1946, politicians, diplomats and sports heroes have dominated the selection list — including figures such as John Diefenbaker, Pierre Elliott Trudeau and Terry Fox.

Very few nominees have earned the most votes out of infamy.

Just as an afterthought, last year’s Newsmaker was Jack Layton, the former leader of the New Democratic Party who passed away in 2011.

Is it true that President Obama pardoned this turkey because he felt guilty about trouncing a turkey in the election?

First we had lengthy debates over what President Obama knew and when he knew it regarding the attacks on the American consulate in Benghazi, Libya (gotta admit I first thought it was Ben Gazzara). Then the whole Petraeus Affair hit the media resulting in his resignation as top dog at the CIA and prompting questions about who knew about the affair and when did they know it. Also, what did his paramour Paula Broadwell know – state secrets? 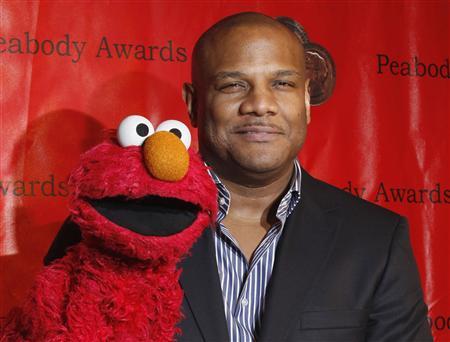 Voice actor Kevin Clash arrives with the puppet Elmo for the 2010 Peabody Award ceremony at the Waldorf Astoria in New York in this May 17, 2010 file photo.

And now it’s Elmo’s turn. His puppeteer Kevin Clash has taken a leave amidst  claims of underage sexual conduct levied by a now 23 year old. Again one has to ask what did Elmo know and when did he know it. He was pretty close to Cash, given he spent his working hours propped on his hand.

The best case scenario is that Elmo knew about any misconduct and kept it to himself, the worst case is that Elmo was involved as a lure. All that cutesy laughing and pounding the floor in mirth may have been masking a more sinister role.

First Big Bird gets dragged through the election campaign and now this. A bad time for Muppets.

Supporters celebrated the re-election of Barack Obama as US President around the world. From Berlin to Sydney, Bangkok to Westmount.. Westmount?!? Yep, at least one Westmount homeowner showed his or her satisfaction with the outcome of Tuesday’s US election – balloons and all!

Tired of all the polls? Don’t let the plethora of polls put a pall on your election day. Today’s is the only one that matters, but if you’ve not had your fill already …

An opinion poll, sometimes simply referred to as a poll, is a survey of public opinion from a particular sample

The first of three presidential candidate debates is now in the books and, as I mentioned earlier, the debates are a critical element of the US election campaign process. While there may not have been a knock-out punch thrown, there were enough points scored by Mitt Romney to give him some momentum heading into the last weeks of the campaign.

President Barack Obama could take a few lessons from hockey greats like Wayne Gretzky, Mario Lemieux and Sidney Crosby. It has often been said that what outstanding hockey players do when they don’t have the puck is as important as what they do with it. When they don’t have possession of the puck they draw defenders away from their teammates and open up the ice; they tie up one, perhaps two opposing players, and they position themselves so that if the puck does come to them they are in a good place to score or set up a teammate.

What does this have to do with Obama and the debate? He has to work on what he does and doesn’t do when Romney is speaking – i.e. when Obama doesn’t “have the puck”. Last night he seemed to tune out Romney, scowl a bit and take notes – or was he doing a crossword puzzle? He didn’t look like he wanted to be there defending his policies and attacking his opponent. He was aloof and if that is just his personality, he needs to work on it while debating.

… it wasn’t the best atmospherics for Obama to look down, purse his lips, appear distracted, while Romney was attentive, engaged, relaxed. – Jeff Greenfield – Yahoo! News

Other debaters have suffered similar criticisms: George H.W. Bush looked at his watch while Bill Clinton spoke and was lambasted for being impatient instead of listening to his opponent. Al Gore kept heaving sighs as George W. Bush made points –  over acted exaggerated sighs at that.

Obama needs to be in the debate even when Romney is speaking. Show some interest but don’t scoff, be aggressive but not rude, listen attentively but don’t just stare down at the podium.

If nothing else this close debate will make the next one even more interesting. As for Biden and Ryan in the vice presidential candidates debate next week, this is where we might see a punch thrown – literally!!

The clean and jerk is one of the two Olympic weightlifting events; seems it could also be a description of the candidates for president.