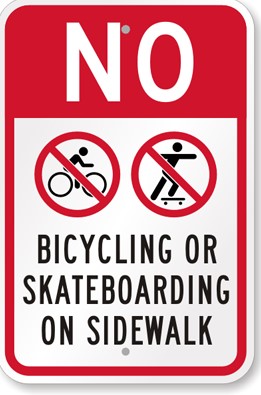 Here in Montreal, the weather has finally shown signs that spring may just arrive at long last. Most if not all of the snow has been washed away by rain, sidewalks are being cleaned of the various abrasive substances used for pedestrian safety during the winter i.e. sand and gravel. I saw a few top-down convertibles yesterday and motorcyclists are back on the roads.

Of course, this change in the weather also means the return of bicycles. The city has been busy placing Bixi docking stands all over town, thereby greatly reducing the already small number of parking spots available in the downtown core.

The bike lanes have once again been festooned with the flexible stanchions that are removed to allow for snow clearing during the winter. Montreal has more than 700 kilometres of bike paths, making it a North American leader in this area. Cyclists are out in vast numbers: recreational and those who use their bikes as their main method of transport. Evidently, there are also some who harbour dreams of the Tour de France, getting off their sofas after the long winter and suiting-up in all the latest gear. They seem to assume that looking the part is what it is all about

There exists a love-hate relationship between drivers and cyclists here; drivers love to hate cyclists. Not without reason. While I agree many, perhaps most, bike riders are law-abiding users of the roads. Sure sometimes they roll through stop signs and red lights in an effort to maintain momentum. Lots of drivers do likewise. That does not bother me, as long as it is done safely. But what does get me is bicycles on sidewalks. I rarely, if ever, see a car on the sidewalk dodging heavy traffic.

I figure no one over the age of about seven should be riding a bike on a sidewalk. Yet on a daily basis, I encounter alleged-adults pedaling along the sidewalk in an effort to avoid street traffic. This is dangerous, stupid, selfish and potentially life-threatening. But there they are scooting along among the pedestrians.

I don’t know if this is a Montreal thing, but on a recent trip to New York City, a much more congested city with evidently few bike lanes, I did not encounter a single sidewalk cyclist. I have a friend who is a bike courier here. He has done the same job in both London and New York. He points out that although much bigger cities, London and New York are safer for bike couriers because drivers are more aware of their presence on the road, and their right to be there.

Don’t just sit back and watch your “fellow” cyclists giving you all a bad name by riding recklessly. Shout at them! Let them know they are screwing things for all cyclists.

There have been countless letters to editors, op-ed pieces and street side yelling matches over this issue here. What irks me is that the supposed majority of cyclists, the law-abiding ones, don’t seem to understand that they are being disparaged by the scofflaw sidewalk riders. Therefore I think it is high time cyclists started to police themselves.

Don’t just sit back and watch your “fellow” cyclists giving you all a bad name by riding recklessly. Shout at them! Let them know they are screwing things for all cyclists.

2 thoughts on “Bicycles On Sidewalks”