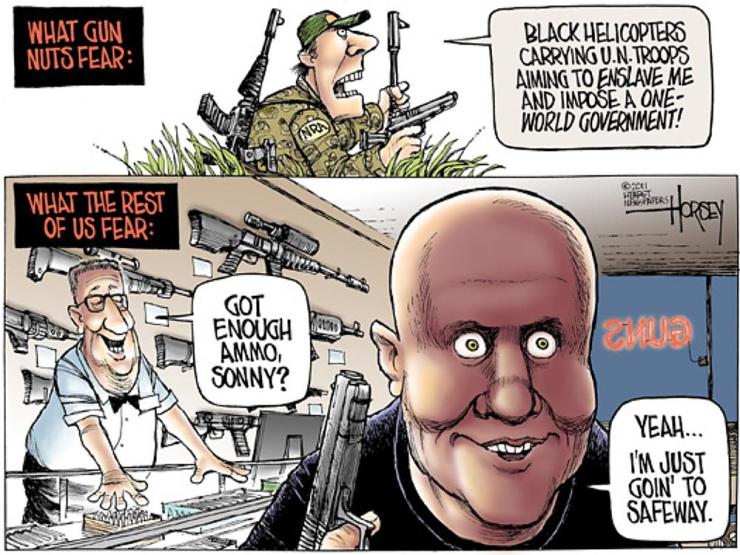 As the latest installment in the gun debate rages in the USA following the horrific multiple death shooting in Parkland, Florida I can’t help but be reminded of some of the ludicrous sayings that the pro-gun advocates often spout.

When was the last time you were shaken by breaking news that a deranged strangler was seen in a high school?

I am conversant with several, including the granddaddy of these pithy little slogans is, of course, the infamous: Guns don’t kill people, people kill people. When was the last time you were shaken by breaking news that a deranged strangler was seen in a high school? Has a school ever been put on lock-down because a mentally ill person was stalking the halls threatening to choke or kick to death students and teachers? Of course not. Seems to me guns are killing people.

If, as a society, we could control mental illness it would be a wonderful thing in many ways, but as of yet, we can’t. However, the other variable in the guns don’t kill people equation is guns. As has been shown in countries such as Australia, these can be controlled.

So frankly it would be more accurate to say: guns don’t kill people alone, people with guns kill people. But if those people could not get those guns, who knows how many lives would be saved, not just in the large, media grabbing multiple killings, but also those lost in smaller almost daily shootings.

I fully support the right to arm bears.

Then we have the cute, if guns are outlawed, only outlaws will have guns. Mass killings seem to be the purview of the mentally ill, not ‘outlaws’. This is along the lines of: an armed man is a citizen. An unarmed man is a subject. Sadly some people believe this nonsense.

I am not a gun person, yet I do have a favourite pithy statement myself: I fully support the right to arm bears.