Yesterday was the day after the first significant snowfall of the year. That means yesterday was the first snow removal day of the year. As I understand it, the city must give folks 12 hours advance notice regarding no parking restrictions. So if your street is to be cleared between 7:00 am and 7:00 pm they must put up the signs by 7:00 pm the night before. I can attest that when I arrived home at 5:15 pm on Monday evening the signs were duly positioned, a full 14 hours in advance.

…  towing contractor refused to take it on grounds that it was already broken and may withstand more damage during the removal process.

This poses no problem for us as my wife leaves for work before seven o’clock anyway, but it would seem that after a few months of summer, many people forgot about the whole car-towing for snow removal concept. In talking with one city employee he told me that on one street alone a total of 15 cars had to be towed away. This greatly slows down the entire process of removing the snow. 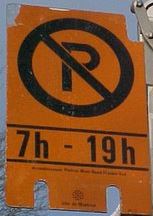 One of the ironies however is that across the street from my place there has been a scooter parked for a least a month. It causes more trouble that a small vehicle should as people are afraid to park too close to it lest it get knocked over and bang their car. One little scooter is affecting two parking spots! Well I thought this would be remedied by removing the scooter to allow for snow clearance. But I was wrong.

There were two cars on my street that had to be towed away, but when it came to the little scooter the towing contractor refused to take it on grounds that it was already broken and may withstand more damage during the removal process. He was concerned that he would face any ramifications should the owner ever emerge.

So now the scooter is packed in with snow and is still causing much annoyance to locals seeking parking.