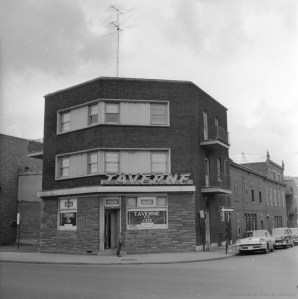 Those words were made famous in the late 1960s by Beatles protégé Mary Hopkin, in fact the popular recorded version was produced by Paul McCartney. But for many Montrealers something just didn’t ring true with the song. The city was full of taverns, that wasn’t the problem, but they were beer halls that were off-limits to women. So having a woman sing about fun in a tavern was a wee bit odd to some.

At one time Montreal had many neighborhood taverns like the one pictured at right (the photos in this post come from the Montreal City Archives).  Perhaps not as many as the ubiquitous English pub, found all over the UK, but enough that they play a significant role in the city’s heritage. I’m not referring to large, downtown establishments, but local watering holes. Taverns were for men only, they only served beer, either draft or bottled. Some had simple but usually tasty (and always unhealthy) food, but many only offered  peanuts, chips and, of course, the traditional pickled eggs. They opened early, often around eight o’clock in the morning and, by law, had to close at midnight.

There were no bars in taverns, just chairs and tables. No entertainment, just a television. Imitation wood paneling was de rigueur in Montreal taverns. The chairs and tables were basic but comfortable and required a simple setting of an ashtray and a salt shaker for the pickled eggs, or to revive the head on your draft.  Taverns with air conditioning usually cranked it up to the maximum, but many used only floor fans to keep patrons cool. A single television, basic home-style, not a giant screen projection get-up,  was suspended on a bracket and used primarily for sports events.

The beer served was local bottled or draft. As I’ve mentioned before, don’t confuse “draft” with “on-tap”. You can now have the finest beers in the world on-tap, as opposed to bottled. For instance, Guinness on-tap comes in kegs and is pulled fresh around the globe. Guinness in bottles and cans is a different animal. But the draft beer served in Montreal taverns was a special, some would say inferior,  product brewed by the main breweries and served ice-cold from taps. It was available in pitchers, steins or glasses. The glasses were ordered at least two at a time as they probably only held six or eight ounces. In my opinion these were the best way to drink draft beer.  The cash register in photo on the left shows a sale of 45 cents has been rung up. These photos were taken on July 15, 1963, significantly before I started drinking beer, draft or otherwise, but I’d guess the 45 cent sale was 9 glasses of draft at a nickel each.

Taverns were places where men could meet to have a few glasses and solve the problems of the world, or sit in peaceful solitude enjoying some cold ones while lost in thought. Many taverns were owned by Montreal Canadiens  players and therefore afforded an opportunity to talk hockey with a pro. Next to the beer, the atmosphere was the draw. Similar to the British pub, people frequented their local tavern, or maybe one close to their workplace, where they felt at home. Waiters seemed to stay working at the same place for years and would greet you by name or if you were new they’d refer to you as Boss or Chief or some other moniker.

It wasn’t all beer and skittles mind you;  occasionally a patron would over-indulge in the cheap beer and become rowdy. Fights often broke out over one thing or another. Card games and even arm-wrestling were not allowed in an attempt to keep a lid on well oiled, overly competitive drinkers. 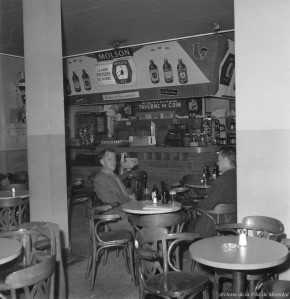 The Montreal tavern was pushed aside in the 1970s by establishments known as Brasseries (the French word for brewery, but also used to refer to a “fine” drinking establishment). These newfangled places were heavy on glass and chrome, served beer and wine, could stay open until 1:00 am,  and were open to both men and women.

Sadly both taverns and brasseries soon were things of the past as people moved out of the inner city neighborhoods in favor of the suburbs. The local tavern didn’t fit into that environment.

I guess I’m caught up in my subject because before posting I keep hitting the “draft” button, but no beer arrives…

4 thoughts on “#TBT Montreal’s taverns; relics of the past”