While it feels like it’s been much longer, it has been 20 years since a Canadian team won the Stanley Cup. The Montreal Canadiens 1993 cup win was the last by a team from north of the 49th parallel – and it looks like it may be up to them to break the streak, as Canadian teams are as rare as hen’s teeth in the 2013-14 playoff hunt.

In fact it was on this day, March 27, in 1917 that the first ever US-based Stanley Cup was awarded when the Seattle Metropolitans defeated the Montreal Canadiens. 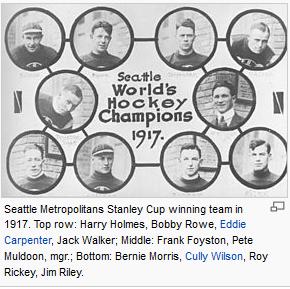 The distance between Montreal and Seattle is 3,670 kilometers (2,281 miles). I assume that in 1917 charter flights were not the norm for professional sports teams, which means a long train ride. As the championship was held in the Seattle ice Arena I can only imagine the Montreal team must have been exhausted after the long trek across the continent, no doubt accounting for their drubbing – three games to one while being outscored 19-3!

DCMontreal is a Montreal writer born and raised who likes to establish balance and juxtapositions; a bit of this and a bit of that, a dash of Yin and a soupçon of Yang, some Peaks and Freans and maybe a bit of a sting in the tail! Please follow DC on Twitter @DCMontreal and on Facebook, and add him on Google+