Yesterday the temperature on the dashboard thermometer in my car here in Montreal hit 31 degrees Celsius (about 87 Fahrenheit); evidently we have skipped spring and jumped right to mid-summer. There was even a hint of humidity in the air, and we all know what that means! Yes indeed it’s Cicada time. 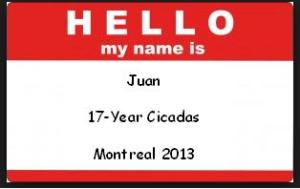 Those little buzzing insects who sit in trees singing when the temperature hits a certain point are on the move in the Northeast of North America. It has often been said in Scotland “Nae wind, nae golf” , and the same is true here where no cicadas, no summer is often heard (although it’s only me saying it). This year is a special one in that the famous Brood II 17-year cicadas will be emerging from their subterranean abodes and making their way in search of a partner with whom to mate.

Like members of Lions Club International or AA at a convention,  these chirpers will congregate in cities and towns along the east coast. As you can imagine hotels are fully booked years in advance for this migration. Hotel and restaurant owners grin from ear to ear when they think of the second weekend in June when the Formula One tour hits town along with the Rolling Stones; throw in a few million cicadas and you’ve got record-breaking potential.

Small inns and motels are festooned with Welcome Cicadas signs and many, including yours truly, have seized the opportunity to make a few bucks. Pictured at right is what was originally a small terrarium, but has now been converted into a cicada B&B. I’m also looking into getting T-shirts and souvenir spoons made

But not everyone is pleased with this influx of insects. For several years I have had a nodding acquaintance with a cicada, Carlos, who spends his summers in a tree outside my window. Carlos is from Mexico but has taken to Montreal in the summers for the warm weather and numerous festivals. He’s none too pleased with the 17-year cicadas: “Lazy,” he calls them, “they think they can drop in once every 17 years and the world owes them a living – shameful. And the media glorifies them, terrible. I’ve had the same tree for years, my wife, Consuela and the kids, Chicko and Chicka travel up when school is out, we’re part of the community. I’ve even bought and installed an AutoCicada© device to sing when I’m off sightseeing with the family”

It will be interesting to see how the summer plays out with the one-time visitors and the annual guests. One thing is for certain, it’s going to be loud!